Posted on November 11, 2021 by Narratologies Team

Athens is a very old city. Consequently, it never leaves us bored! (Also, we‘ll never get bored repeating this first sentence.) Age leaves behind countless treasures, traces, and places to discover. Among them, the Athenian hangouts.

Ok, maybe the modern city is only around 200 years old. But the history behind it is ten times older! And seems like people in this city are not much change lovers. The proof is that we have hangouts not from the ‘80s, nor the ‘70s, but from the 19th century!! Still operating, still counting. These are definitely places to visit, even only because of their age. Let us introduce you to our most favorite! 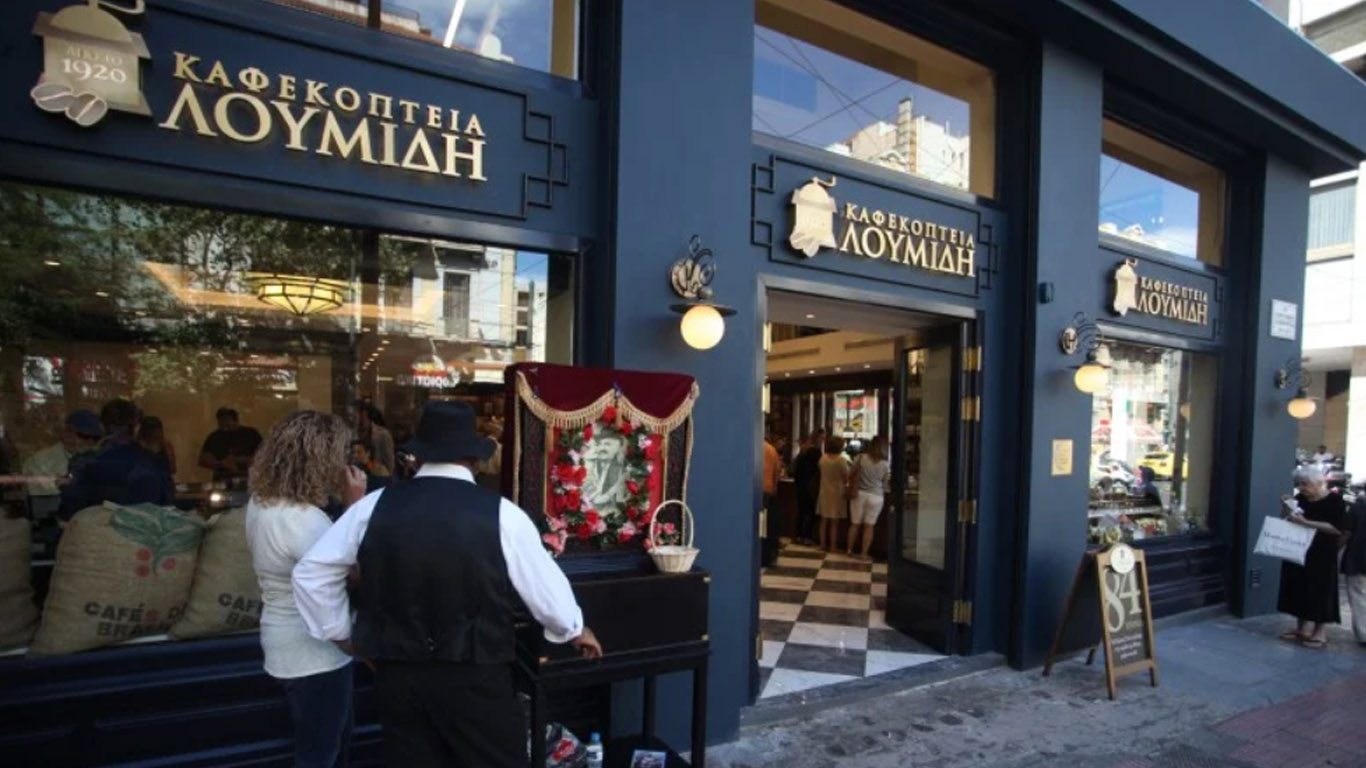 “Haven’t lived the ages of Brazilian, nor of Loumidis attic” says Foivos Delivorias in one of his songs. And he of course refers to the famous café séparé once operating at the coffee grinder’s. Loumidis is the most well-known Greek coffee brand. For most Greeks, it’s the way to start the day. May the old hangout of Stadiou have been transferred to Panepistimiou str., but it’s still under the same brand. In late 19th century, this place was a hangout mostly for writers, poets, editors and exceptional personalities of Greek literature. And it was known as “the attic”. Everyone knew that the usual date spot was Loumidis attic. Elytis, Sachtouris, Gkatsos were three of the shop’s habitues. Nowadays, you can go there to find delights from the Cyclades (loukoumia), or the delicious cocoa bites, the superhit of the shop. Furthermore, you can enjoy traditional Greek coffee and relax in this set coming from years far gone… 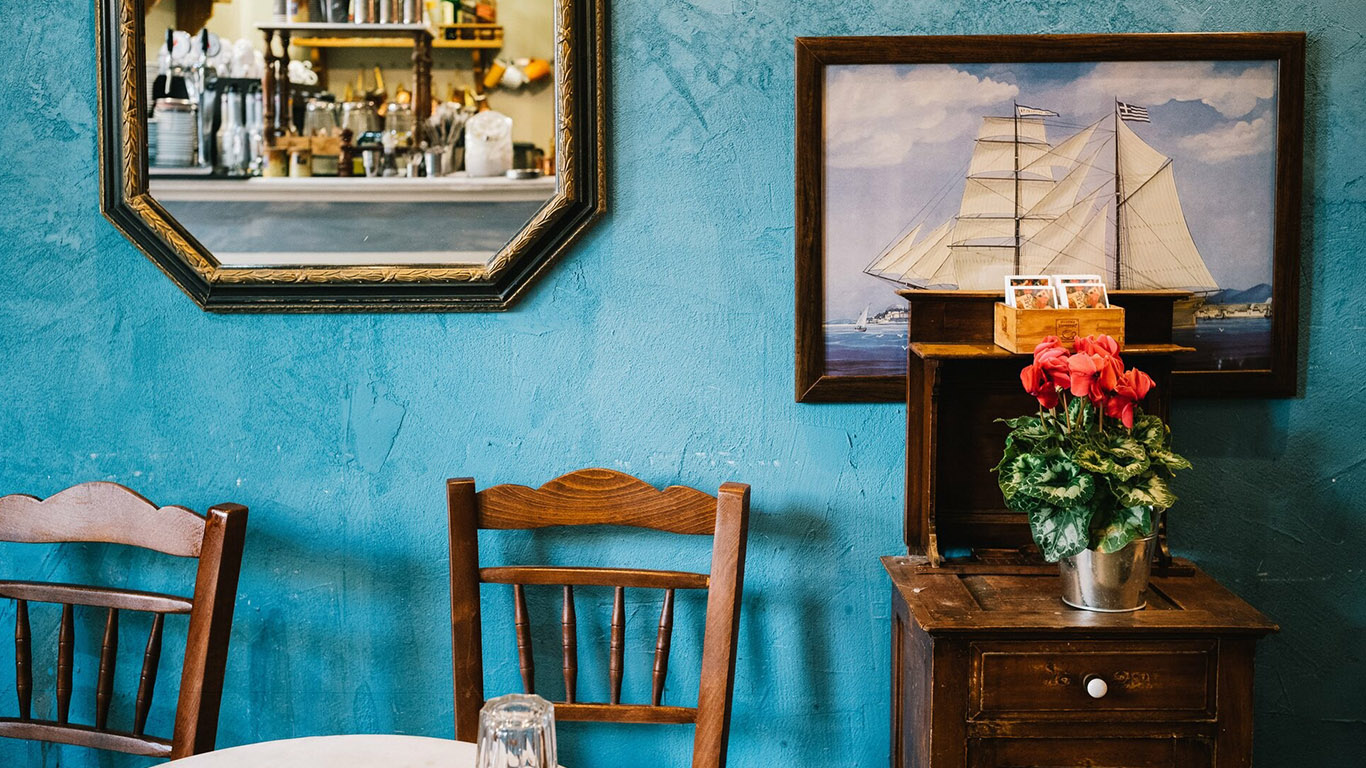 One of the oldest hangouts. Plus, among the most beautiful balconies of the city center. From here you can look at the peaceful Metropoles square, with the plane trees. This place has one of the sweetest views in Athens. You know, not the wealthy one, heading to Lycabettus or the sea. The other one, full of reminiscing… Here again, traditional Greek coffee accompanied by loukoumi is the best pause of your day. But there are also snacks and small dishes, a.k.a. mezedes, that are a perfect match for ouzo and tsipouro. Many silkscreens hang on the walls, reminding of glorious moments of Greekness. Also, the Greek Tradition Center is hosted in the place. The original coffee shop under the very same name opened a few meters away. In addition, it used to be an Italian coffee shop, in Monastiraki of 1839. “Oraia Ellas” is a proud hangout, taking care of visitors since then, almost unstoppably.

The ground floor of Bagkeion 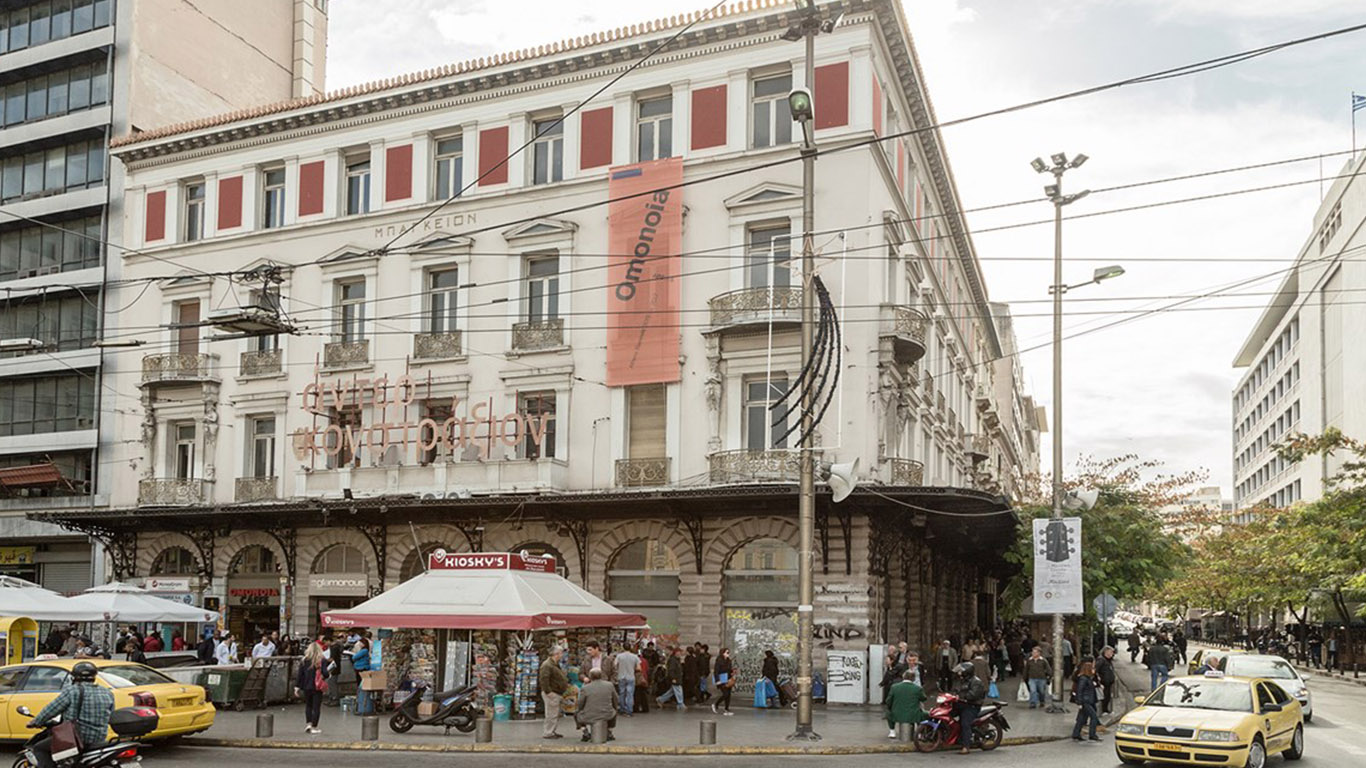 In this list of hangouts, Bagkeion has done the biggest twist. From a late-night bar with a bad reputation, now hosts performances and biennales! Bagkeion was a “café chantant” operating late night hours, following French prototypes. It was next to the grand hotel Bagkeion, so it got the same name. But of course, it did not share its reputation! Chanteuses used to work in the café, sing, dance, and serve. At the same time, there were séparés for private appointments and dating. Workers were mostly French, Hungarian, or from Vienna, satisfying the more European tastes of Athenians. The other section and sector of the city, faithful to tradition, definitely preferred girls from Smyrna, Armenia, Turkey -more of an odalisque… Thankfully these days are over, and now you can visit Bagkeion for a new age performance, or an art exhibition. Moreover, if you find its door open, please get in. The coffee shop is not still open, but you can see the inside of the old hotel. Its architecture will pay you back for this unusual stop! 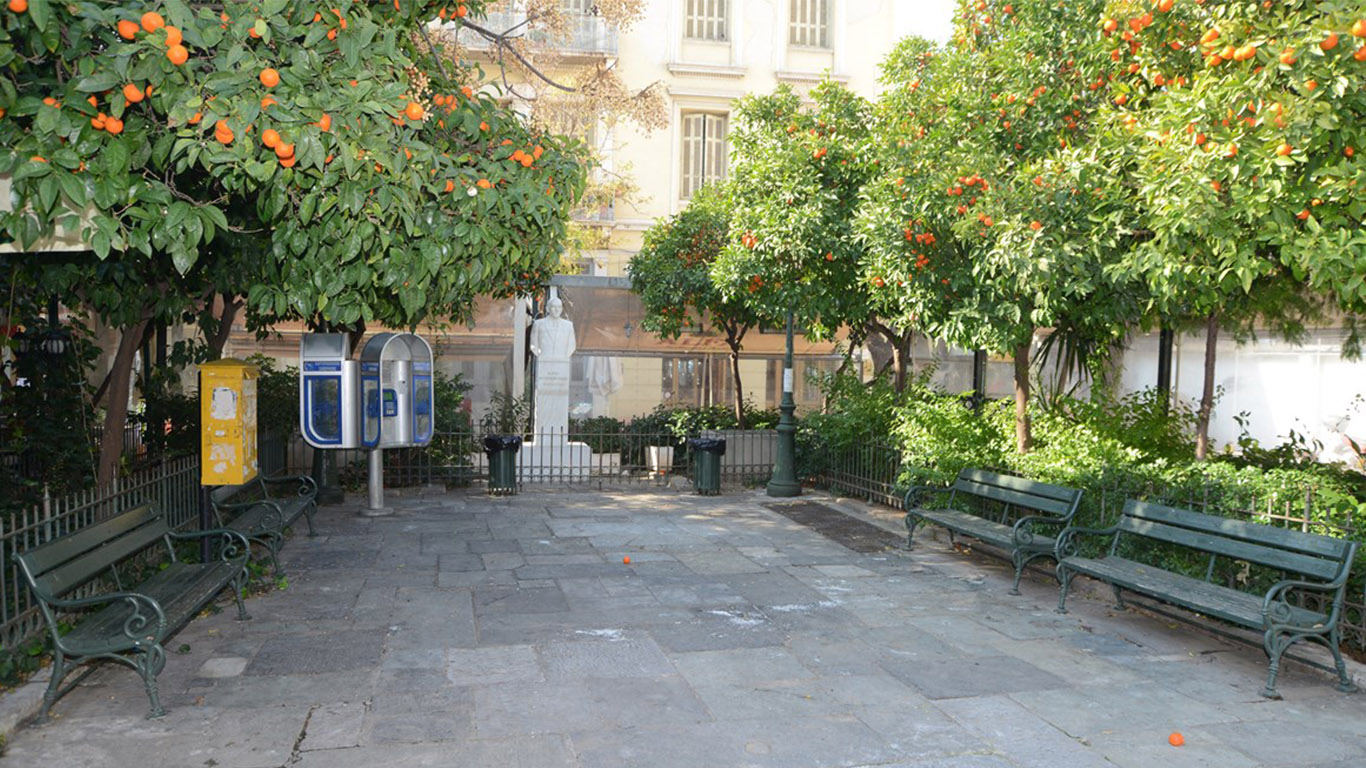 Welcome to one of the oldest squares of the city! Nowadays you can enjoy peaceful moments of serenity in Filomousou Square. Back in the 19th century though, things used to be way different. You see, Plaka residents -Athenians, born and raised- didn’t want to share the main square of their beloved neighborhood. With whom is the following question. But with Anafiotes, of course! People from Anafi Island came to build the rising capital. Athens was deprived of good technicians back then -and maybe still does. So, shouting and quarrels started every now and then. These incidents often ended up in continuous fights, ‘till police intervened. Doesn’t sound that funny, eh? But now, all this is history, and everyone is welcome to spend a sunny afternoon among the elms. And how beautiful these trees do smell! What a nice note in the city!

The coffee shop of the fighters 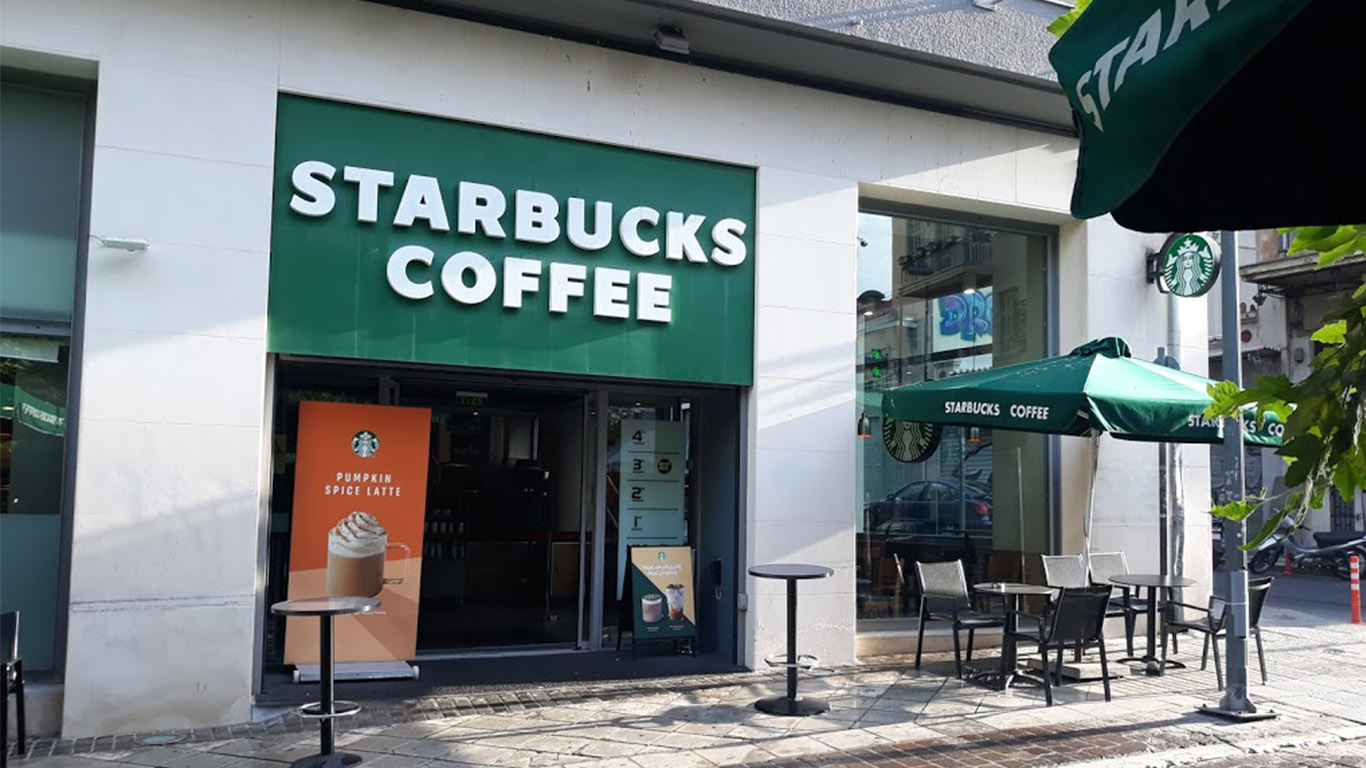 As you have realized ‘till now, Athens is full of cafés, cute bistros and places to taste mezedes. This is not a new phenomenon. It seems as if the city was made to be this outgoing. In addition, its residents seem to need it! This applied to the 19th-century residents, too. The chiefs of the Greek Revolution also needed some rest after the combat! And in the new capital, they had their own café among the hangouts, named after them. “The coffee shop of the fighters” used to stand in Aiolou and Metropoles intersection, right in the city center. It was a place to have coffee, loukoumi, and hookah, but also a place to keep you up to date. In there, there was always a word about politics and politicians. Accompanied by quarrels and fights, of course. Politics and bursts go hand in hand in this country! Nowadays, newspapers and journals are occasionally sold in the place, as if one can still enter the café and join the reading along with their coffee… The funny thing is, you can still take a coffee here if you need it. Maybe this spot was meant to be a coffee shop since now it hosts the Starbucks of the city center. If it happens you pass this spot, pay some attention to a place of everyday history!